What’s the secret to a successful rebrand? Your customers!

So you’re ready for the big rebrand.

But should you keep it a secret or should you engage your audience in the process?

One can argue that no one wants to see how the sausage gets made, but there are compelling reasons why you should share the rebranding process with your audience.

And if you do want to share it, how do you go about it?

My client Nicole asked me these questions and I bet that you’re also wondering about the best approach to this problem.

So what did I say?

You should give your audience a look behind the scenes of the rebrand to make them feel that they are part of the process.

The primary target of a rebrand is your audience. They are the ones you want to connect with and they will decide if what you have to offer is worth their time.

The audience is the bread and butter of your business and including them in a big decision (i.e. a complete change of identity) is always a good idea.

Consider what a rebrand says about your business.

A rebrand says, “Something does not work, and we’re aware of it.” And while there are many good reasons to decide a rebrand is needed, your audience may not be aware of any problems or challenges you deal with. In fact, they may really like the brand you currently have.

>>> Read about the 5 most common reasons for a rebrand

This is why the big reveal may end up becoming an unwelcome surprise. Especially if they had no idea the change was coming because you forgot to (or decided not to) share it with them.

But if you explain it to them, things may turn out differently.

By presenting the new look of your business or product in a controlled and compelling way, you create more chances for the audience to respond positively to the changes.

And that’s the thing many business owners forget to do. They unveil all these changes thinking that people will only see the improvements, but what happens if their audience sees the gaps instead? And what if they lose a part of their audience engagement along the way?

Here’s what happened to ConvertKit, one of the biggest email marketing providers, when they announced their grand renaming to Seva in 2020.

ConvertKit worked for 2 years on the perfect name with the perfect meaning (according to them) with a long launch story explaining the WHY.

And immediately after the grand announcement, their audience let them know that the new name held religious significance, and that it would be inappropriate for a huge tech company to use it.

Sure, they didn’t have to listen to them.

But ConvertKit realized their mistake and reverted to their old name almost immediately. However, they lost a lot of time and resources in the botched renaming.

In 2010, clothing retailer GAP decided to replace its iconic blue-box logo in a bid to look more contemporary. The reaction from their customers was swift and harsh. After only six days, and much public outrage, GAP reverted to its old logo. 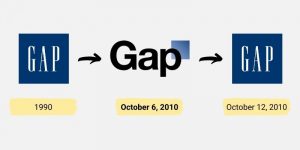 And more recently, Kim Kardashian initially called her new shapewear brand Kimono, a playful riff on her name seen in her other brands, KKW Beauty and Kimoji.

Naming your lingerie brand after one of the world’s most recognizable traditional garments was a bold choice. But it didn’t pay off.

In a statement, Kim Kardashian said that the name was meant to be “a nod to the beauty and detail that goes into a garment.” As expected, she was heavily criticized for cultural appropriation and offensive misuse. She changed the brand’s name to Skims, just six days after announcing the brand launch. 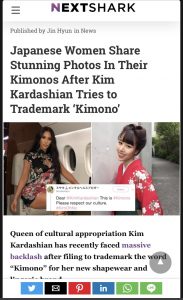 All these rebrands failed because the teams skipped one crucial part: They didn’t include their audience in the process.

When doing a big rebrand, it pays to listen to a diversity of opinions to minimize any blind spots you may have. Asking for everyone’s input (and not just from your internal team) could have prevented the marketing faux pas that ConvertKit or Kim Kardashian brought on themselves.

In the end, you’re likely rebranding to connect with your audience more, so why not include them in the process?

So let me ask you…

Why would you not make your audience a part of the process so they understand your reasons behind the big change? Why would you not share the behind-the-scenes? Ask their opinions? Share your thoughts?

Let’s take a look at how exactly you can make your audience a part of your rebranding.

1. Know the real reasons behind your rebrand, the overall goal, and ways to achieve it. And talk about them. A lot.

Your brand is more than your visuals. And rebranding is much more than just changing a logo. In fact, changing your visuals should be one of the last steps in the process.

There are a few aspects you need to consider before you can even dive into the rebrand itself:

These questions will help you create the most important cornerstones of your brand and the rebrand journey should be shared with your audience as well.

It sounds obvious, doesn’t it? The reality is if you’re anything like my client Nicole, you’ll be wondering how exactly you should ask them. Should you only tease them with sneak peeks and leave the actual reveal for later, or show them everything you’re doing?

In the early stages

Create quick polls on your social media to ask how they see your brand now. Ask them what they like about you. Read between the lines to get a good picture of what they really value about your brand.

You can even send some feedback forms that go directly to your inbox and give them some incentive (e.g. a discount to your shop/services, or include their reply in a giveaway) to fill them out.

If you’re naming or renaming

Share your thought process with them. Let them vote between options. Ask for their ideas even!

Listen to the opinions but do your research

As you probably learned from the examples above, the more research you do, and the more people you share the process with, the quicker you figure out if something doesn’t feel right.

However, make sure to filter the useful opinions from the subjective ones. 100 people will have 100 opinions, so always make sure you don’t get too concerned about those that do not bring real value. Always reflect on the overall goal and vision you have and the problems you’re trying to solve.

Once working on your visuals

Show them pieces of what your designer is working on. In fact, encourage your designer to share behind-the-scenes content (e.g. mood board, logo options) as much as they can. It will only help you make the whole process more interesting for your audience.

If possible, ask your designer to create time-lapse videos or before/after comparisons. I guarantee that your audience will love to see the process unfold before their eyes.

Don’t forget to release the before/after comparisons to your audience, or even write a blog post or record a video sharing everything from A to Z. Not only will they be able to absorb the whole transition in one piece of content, but they will be aligned with your new direction much earlier with a better understanding of everything you went through to achieve it.

Here are a few examples of what my client Nicole Michal showed her audience.

My client Nicole was resharing all the behind-the-scenes content I shared and she included her own explanations and polls along the way.

>>> Watch our IGTV interview for a full conversation about the project

3. If you can’t involve the audience during the process, slow-drip the changes prior to the launch

There may be instances when you would prefer to exclude the audience from the rebranding process. For instance, you may be concerned that your competitors will steal your ideas and ruin the surprise.

If you’re really worried, then share the decision process without showing the actual designs. Ask your audience generic questions and read between the lines, but don’t forget to do proper (and I mean proper) research on your own.

Remember, very few people enjoy the whole “Jump out of the cake surprise” so don’t scream “We rebranded” once and call it a day.

It’s also important to slow-drip the visual changes instead of launching everything overnight, which could potentially leave your audience confused about where their favorite brand has gone.

Launching a rebrand slowly allows the audience to adjust to the new aesthetic, message, and possibly even name while seeing you as the same company they are used to.

Take an example from my client’s rebrand @balanceblends.

While we were not sharing the process as it was happening, we were creating lots of behind-the-scenes content while planning a “rebrand launch” social media campaign.

Two weeks before the official website rebrand launch, we started sharing the behind-the-scenes details and sneak peeks to prepare the audience for what was about to happen.

At the same time, the brand photographer and I (in my capacity as the brand designer) also started sharing content with our followers, in an effort to spread the message and generate interest in the launch.

On launch day, we released an article on the new website describing the whole process and why it needed to happen, inviting them to send us a message if they have any questions about how it affects our customer experience.

The rebranding process can be a valuable asset if you play your cards right.

By asking for people’s opinions and including them in the process, you not only minimize the potential blowback to what may be seen as a drastic change but also help build trust and goodwill with your core audience.

A rebrand is a big undertaking, but it need not be stressful and difficult. By embracing the ideals of collaboration and involving the audience in the process, you may end up with a reenergized brand that pleases your most loyal customers.

While there will always be a vocal few who oppose any form of change, the key to eventual acceptance lies in how you handle your audience. Ask for and listen to their opinions, do your own research, and your brand will emerge stronger.

Do you need help with your brand? Hop on a discovery call with me. 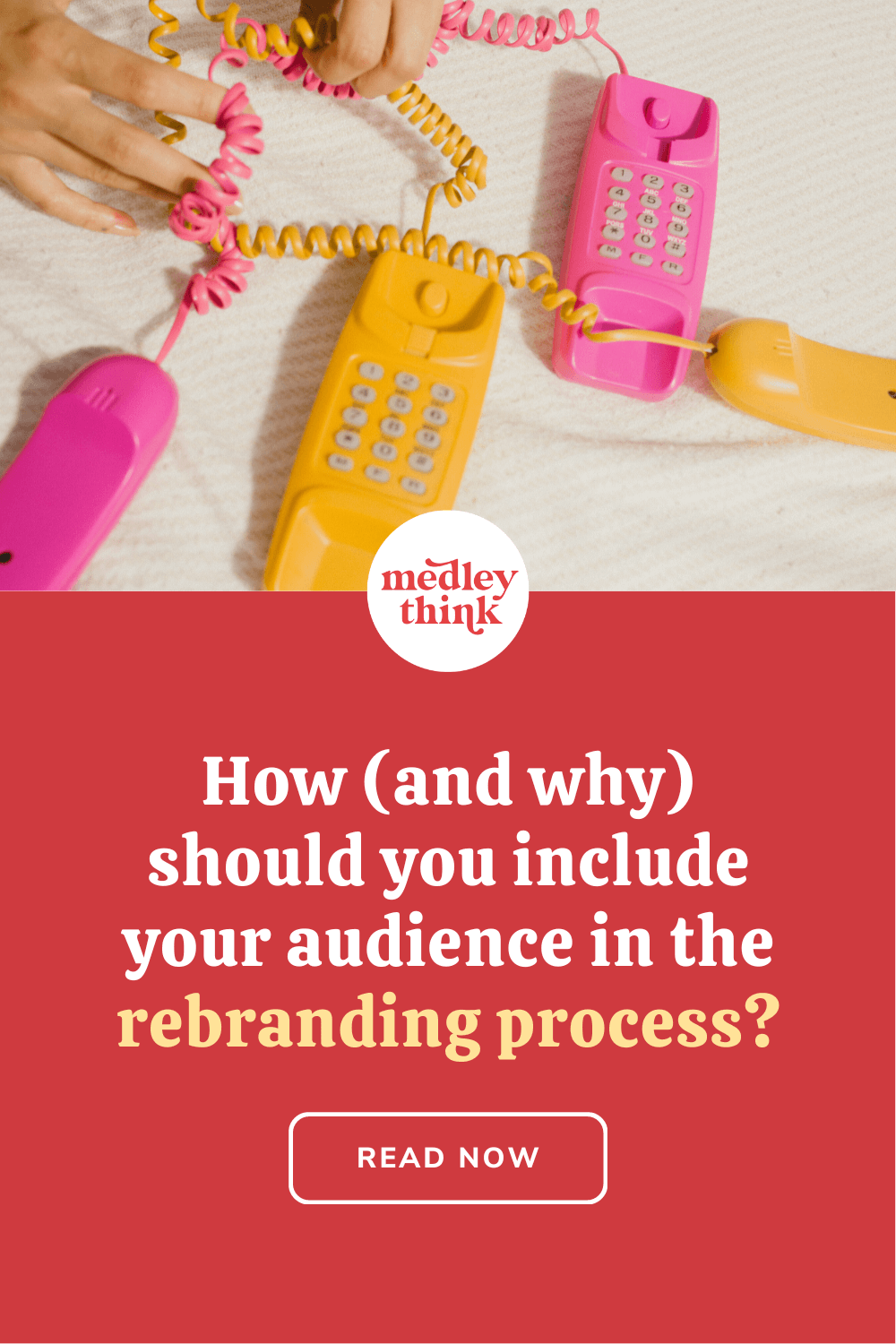 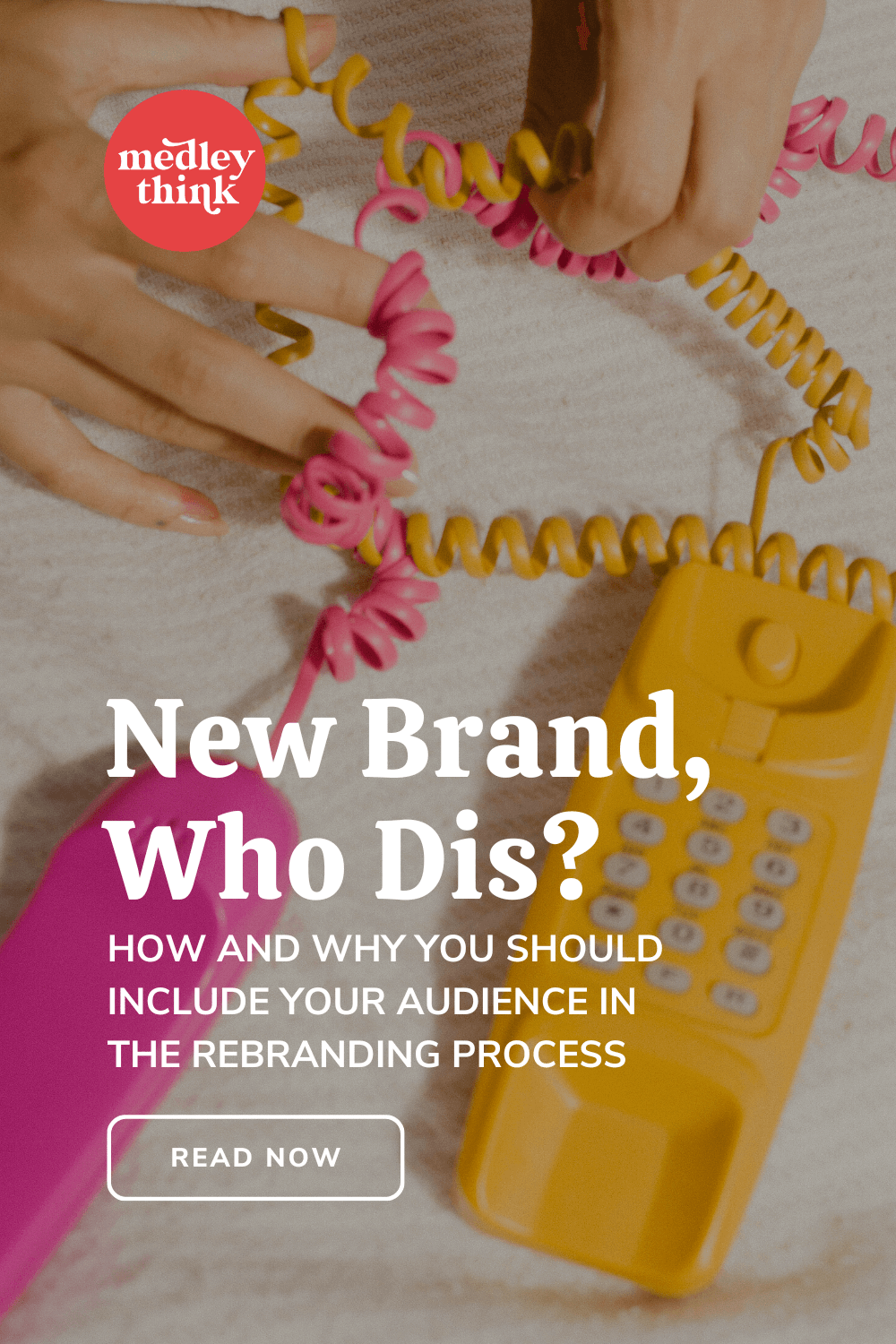 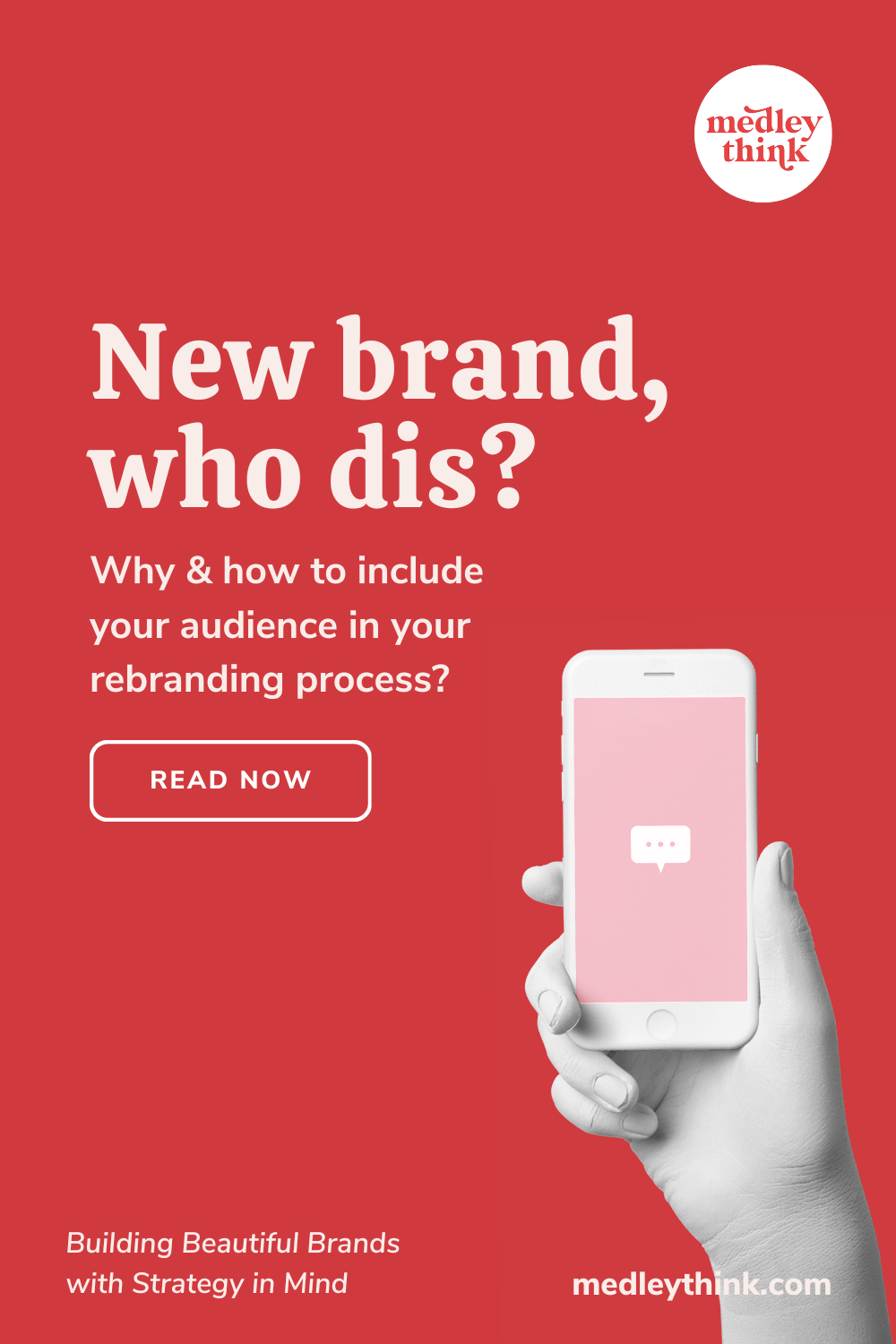 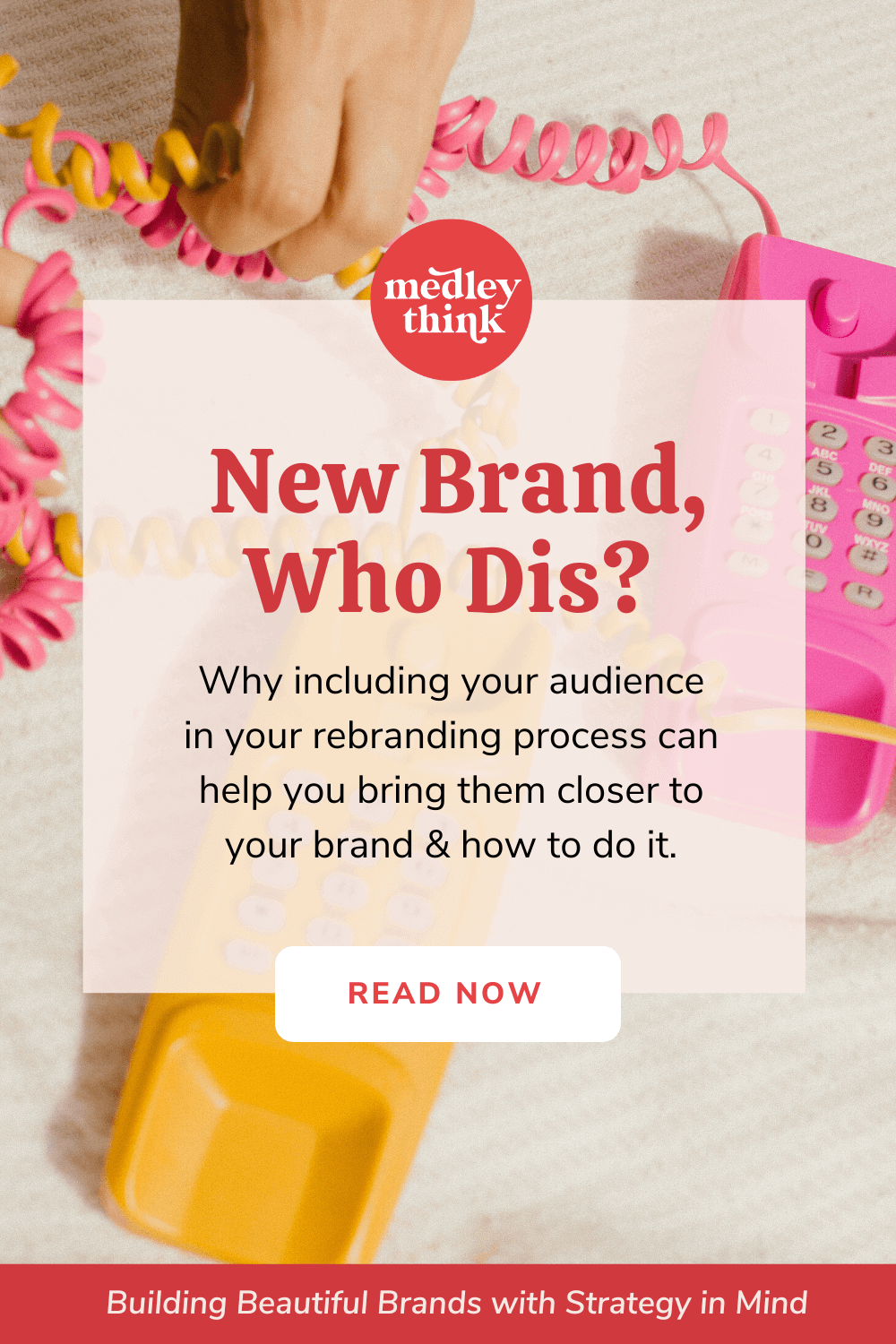 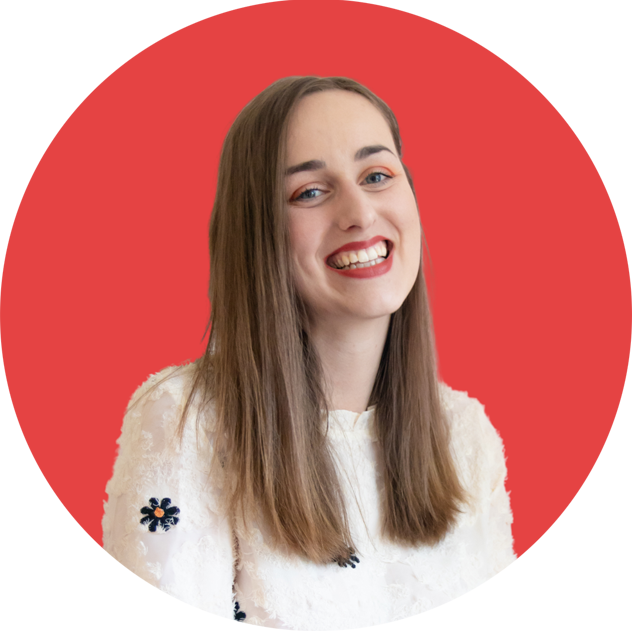 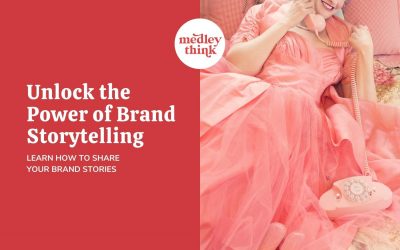 A smart entrepreneur understands that to connect with their audience, they need to harness the power of storytelling. Let me show you how to write your brand story! 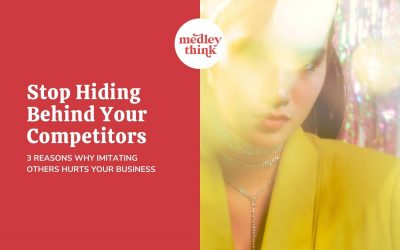 If you position yourself for success, the competition won’t matter. There will always be other businesses offering similar services. Observe them, but do not feel intimidated by them. 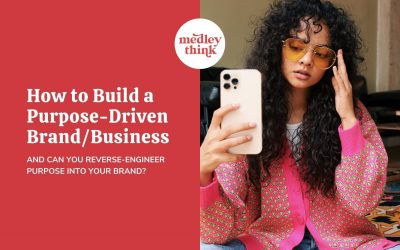 How to build an authentic purpose-driven brand?

Brand purpose is the new black. Learn how defining a brand purpose can help your brand attract customers. Let me show you how to build an authentic, purpose-driven brand.